3 Techniques Predators Use to Hunt Women | by Corinne Mosher

Most members of the public are more motivated to capture the next viral video then to drop their cell phones and render assistance in an emergency. Combine this with the proliferation of video surveillance in our society and unfortunately – or fortunately – those that study what “real world” violence looks like have endless footage of crimes available to them with a few strokes of a keyboard and a wifi password.

Having studied this platform of evidence-based “real world” violence, particularly where the victim has been a female, I have identified three techniques that criminals consistently use to subdue or incapacitate a victim in order to take what they want. The lucky bad guy may only need to use one technique, the truly talented ones can use all three. I call them by the acronym A.D.D. which stands for Ambush, Distract and Disparity.

I feel the need for a disclaimer: I am not a criminologist, a police officer, or a detective. I’m just a people-watcher who’s never been the victim of violent crime and wants it to stay that way.  A.D.D. helps me remember what to be on the lookout for, maybe it will help you too.

Ambush – to attack by surprise, to fall upon, lay a trap for, lie in wait for.

The criminal has the advantage of choosing the theatre of attack. Just like a hunter carefully selects the locations of his deer stands and duck blinds, criminals do not choose the victim, time or location of attacks at random. There are no “random acts of violence”! There is a reason why a certain environment or victim profile was selected – that reason is always because doing so facilitated the crime in some way.

Ambush is accomplished when one or a number of considerations tip in favor of the attacker. The most useful of these to the criminal are the element of surprise, and the limited mobility of the victim, either or both due to environmental constraints and lack of situational awareness by the victim. Simply put, the bad guy knows that if you can’t see it coming and can’t run from it, he can take what he wants and leave, with limited possibility of him having to fight with you, or getting caught.

Ambush through ENVIRONMENT and SURPRISE

Being able to recognize areas with inherent environmental constraints to mobility is why we are wary of taking back alleyways, using ATM’s booths, getting on elevators with strangers or letting pedestrians approach our vehicle in bumper-to-bumper traffic. Even the most latent of survival instincts begin to prickle uncomfortably when a person perceives they are being trapped. Environmental traps can be defined by more than simple physical location. A woman who is attacked while with her children is just as constrained by the presence of the children she will not abandon as she would be if her back were up against a wall.

Those who are familiar with Col. Jeff Cooper’s Color Codes of Awareness know that a person in the White – or lowest level of awareness –  is at a higher risk of being a criminal target than an individual who is actively scanning and interacting with their environment. And yet, the personal defense archives of the internet are teeming with video surveillance of people who slipped into a dangerously low level of awareness and walked headfirst into danger.

Our defense to an ambush is, first, to know our environment. Come to terms with the fact that while you can be literally ANYWHERE and face a violent encounter, there are certain conditions that are more favorable to the criminal getting what he wants. While we may not always have the choice to avoid “high risk” environments, are not always in control of who you are with, the predictably of your movements, or the task you’re performing, you are ALYAYS in control of the amount of scrutiny you apply to those coming in and out of your surroundings.

Distract – to prevent someone from giving full attention to something.

This technique could just as fittingly be called “the diversion” or “the disguise”. The end goal of the distraction is essentially the same as the ambush – to use trickery or traps to close into the personal space of the victim, and is often used in conjunction with ambush tactics.  Game hunters use all the tricks in the book to accomplish this. A hunter will always camouflage his scent and clothing to blend into the background.  He’ll coax animals into coming close to him by setting out bait in feeder trays. He’ll even use life-like plastic decoys and electronic game calls to lure the prey in.

It is important to state that not all criminals take the effort to disguise their intentions during an attack. Not all bank robbers first pretend to be bank customers. All home invaders do not pose as electric company employees, not all rapists first play the part of the attentive, charming stranger. Not all thieves pretend to ask for the time or are needing directions to Chipotle. Criminals know that they don’t belong in the world of good people. The smart ones know how to pretend to be like you and me long enough to disguise their intentions, and distract us from the dangerous situation we don’t even know we’re in.

THE BEST resource I can recommend for learning to identify sophisticated distraction techniques is the book The Gift of Fear by Gavin De Becker. I beg you to read this book. In it, Gavin breaks down these methods: Forced Teaming, Charm and Niceness, Too Many Details, Typecasting, Load Sharking, The Unsolicited Promise and Discounting the Word “No”, and lays out a clear defense for each one.

Disparity of Force. The variable that gives one party a decided physical advantage over another.

In self-defense spheres the power to kill or cripple an opponent is commonly referred to as “Ability”. All three elements – Ability, Opportunity and Jeopardy –needing to be present for the use of deadly force to be justified.

Regardless of the means an individual has of protecting themselves, it is the attacker who has the tactical upper hand and therefore, the disparity of force. This is true for at least two reasons. #1 The attacker not only has the advantage of whatever physical weapon they brought, but also of the benefit of knowing when and where the attack will occur. This means they will probably be able to get in the first blow, forcing the victim to respond to their action after already sustaining injuries.  #2 No one picks a fight with someone they feel can easily fend them off or quickly turn the tables against them. So, whether it turns out to be true or not, it’s safe to say that at the time he initiates the physical attack, the criminal believes he is in possession of the greater ability to do harm. He knows what he’s got, what he wants, and what he’s prepared to do to get it.

There’s reason why we have weight classes in wrestling and boxing.  To speak in generalities: For a man to successfully overpower a woman, he needs nothing more than his advantages of weight, speed, size and strength. This really is the only element that a lucky criminal might need to use in order to successfully incapacitate a victim enough to take what they want. Most self-defense students allot the majority of their training time and budget to learning to physically overcome an attacker’s Disparity of Force. But, if we are familiar with Ambush and Distraction strategies which usually preced the element of Disparity, we will be able to read warning signs that add up to danger and deny them easy prey they were hoping. 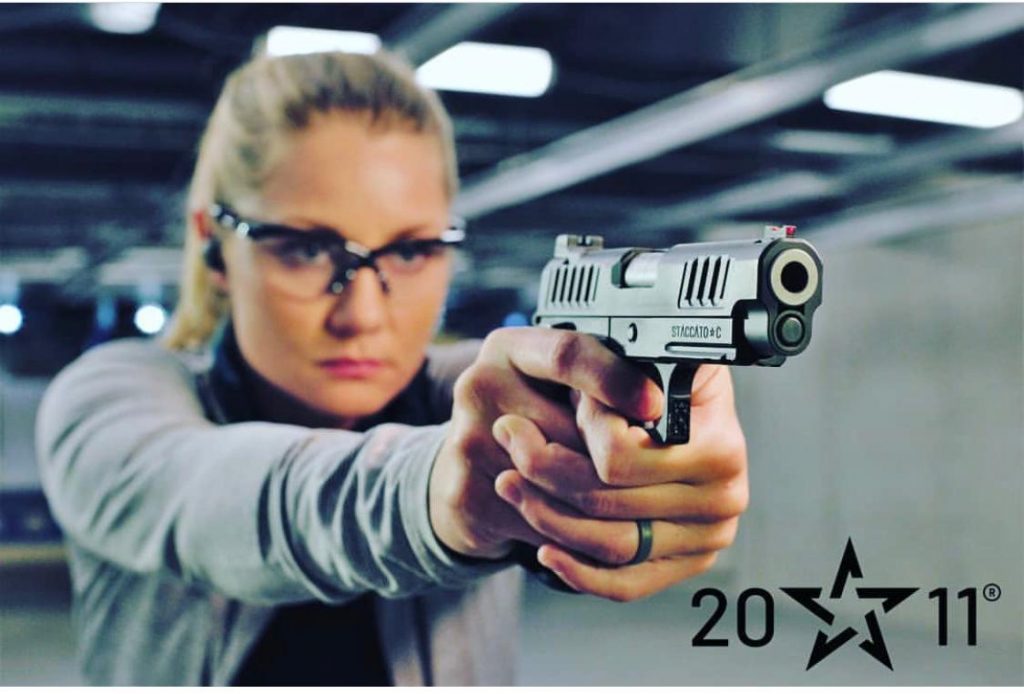 Corinne Mosher is a competitive shooter and a firearms instructor. She is a strong voice particularly to women interested in self defense and concealed carry. Follow Corinne Mosher on Instagram.

All Rights Reserved. Developed by We the People Firearms Training, LLC.